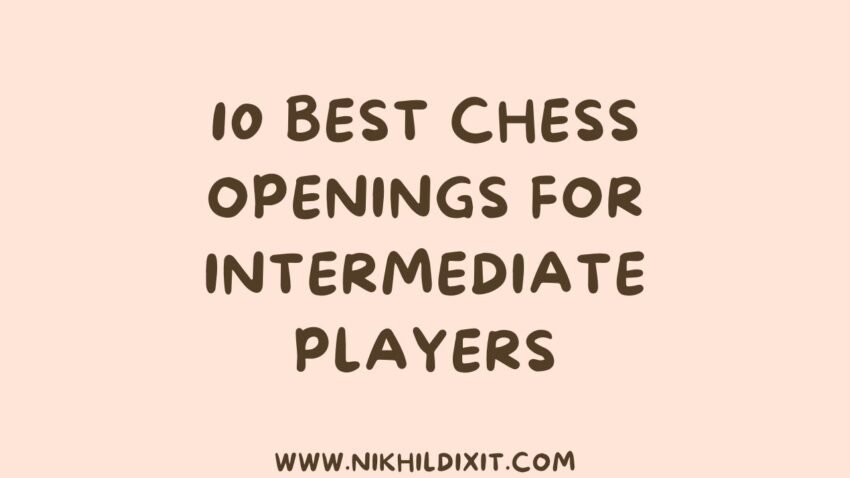 How to study chess openings?

This is the main reason why people get stuck. They don’t know how to prepare chess openings as an intermediate chess player. I would highly recommend the following factors to study chess openings.

1- Chess Coach – To learn chess openings, it is the easiest chess option that you can consider. A chess coach can understand your strength and weaknesses. He can also help you to choose the best chess opening. Again, hiring a chess coach is a very expensive and time-consuming task.

2- Chess courses – I recommend this option to every chess player. There are tens of chess websites on which they provide video courses. You will find video courses on almost every opening. You should also be expected to do your research after studying the chess course.

3- Chess books and e-books – This is another way to study chess openings. There are plenty of publications that provide high-quality chess books. The main problem with books and e-books is that they don’t have any video recordings and to learn openings it is necessary to learn through video.

1. Control the center of the board with your pawns and pieces.

2. Develop your pieces to active squares where they can exert the most pressure on the enemy.

3. Castling is a powerful move that can help you defend your king and launch an attack.

4. Use pawn chains and outposts to your advantage.

5. Keep an eye on your opponent’s pieces and try to anticipate their next move.

Scotch game starts with 1.e4 e5 2. Nf3 Nc6 3.d4. Garry Kasparov was the most famous player who played the scotch game and made it popular. In the scotch game, white’s main aim is to attack in the center and surpass black’s play. Black also has many tricks but if you love to play attacking chess, then I would highly recommend you to play the scotch game. Learning the scotch game is not easy but at the start, you can watch some basic opening videos on youtube videos and then you can buy books or video courses. Following are some of the resources to learn the scotch game.

Larsen’s chess opening become very popular in recent times. GM Jobava Baadur made it popular by playing a lot of games. This opening is very interesting to play from the white side. White’s main aim is to open the bishop on an a1-h8 diagonal and get a better position by playing tactically. Black also tries to push his d pawn to d4 square to stop white’s bishop activity. Although this opening is not advisable for the long term. Maybe you can prepare to play rapid games or a few classical games. There are multiple courses available to which you can refer.

1.c4 is called English Opening. In English Opening white aims to play solid and positional chess. This opening becomes very sharp if black chooses King’s Indian setup. The main plan for white in this opening is to attack the queen’s side. Many people choose this opening as their main weapon even in top-level matches.

The position gets balanced if black chooses to play 1…c5. After that white has to play positionally and calmly. English opening is also the easiest opening to play and learn. You just watch 1-2 videos on youtube and you can experiment with games. Following are some of the best resources to learn English opening.

Richard Reti was a famous chess player who played 1.Nf3 and made it popular. Reti opening is one of the safest openings in chess to play. In the Reti opening white starts by playing Nf3 and develops bishop by playing g3 and Bg2. After doing a short castle, white aims to play in the center and keep making his position stronger.

I have played the Reti Opening and would recommend it to everyone who loves to play positional chess. Also, there is not a lot of material available on Reti Opening. You can watch a video course by Victor Bologan on Reti opening.

This opening is suitable for intermediate and above players and not for beginners. The main reason is it requires a lot of positional understanding.

French Defense is 3rd most popular opening against 1.e4. French opening is played by many grandmasters including Pentala Harikrishna, Vidit Gujrathi, and Anish Giri. French defense is very unique and requires a lot of preparation if you choose to play Winawer Variation.

Caro-Kann’s defense is a good alternative to French Defense. In the Caro-Kann defense, black plays 1…c6 against 1.e4. There are 3 major options for white that you have to consider i.e. Exchange Variation, Advance Variation, and classical variation.

Black’s main plan in the Caro-Kann defense is to play solid. Blacks react according to whites’ choices. If white plays exchange variation, then black has to react accordingly.

King’s pawn opening is the most popular option against 1.e4. In the king’s pawn opening, black starts with 1…e5. This opening is preferred by almost all top cheese players and chess engines. For intermediate chess players, this can be a good option. Although if you like sharp openings then you should go for the Najdorf variation or any variation in the Sicilian opening. Following are the best resources to prepare King’s pawn opening

King’s Indian Defense is a very sharp and tactical opening. I am playing KID for 10+ years. If you want to play sharp games game then this opening is for you. There is a lot of study material available on KID which makes it easy to prepare.

The main drawback of KID is that the engine shows better for white in almost every variation. Although it is the fact that white is always better but practically it is impossible to convert a better position into a win. In King’s Indian Defense, if white made 1 mistake in the opening, white can lose immediately.

If you are a serious chess player, then you can start preparing King’s Indian defense. It will take atleast 6-8 months to prepare the king’s Indian Defense in depth.

Although this opening is not popular it is suitable for the intermediate player. You get a pawn on 2nd move and if white didn’t play accurately then you are just one pawn up. Following are some of the best books and courses to learn Queen’s Gambit Accepted.

The main plan of black in this opening is to get center control and slowly attack white. Following are a few books and courses which can help to prepare King’s English Variation

What level is an intermediate chess player?

It is very difficult today. But I would say if your chess.com rating is between 1000-1600 then you are an intermediate chess player. These chess players know the basics of chess, different mating patterns, and basic endgame knowledge. Still, it is better to judge yourself and your level than to decide from reading any source.

Is c4 a good opening for chess?

C4 which is also known as the English opening is a very good opening to play from the white side. This opening is positional as well as aggressive in some variations.

What is the weakest chess piece?

Each chess piece has there own value. There is no concept of a weak piece. If we say weak piece according to points then it is pawn because pawns only have 1 point.

What does N stand for in chess?

N stands for Knight in chess. A knight is a chess piece that moves by 2.5 squares. Some people call horse instead of a knight.