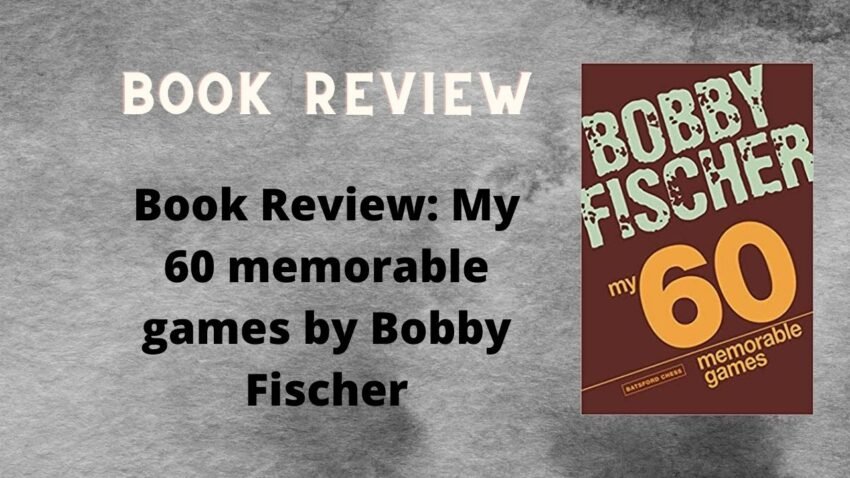 My 60 memorable book is a collection of Bobby Fischer’s best games. All games are annotated by Bobby Fischer himself. The 60 games include 48 wins, 9 draws, and 3 losses. My 60 memorable games book is also known as the best chess literature ever. This book is originally published by Simon & Schuster with 384 pages hardcover. Currently, Batsford chess publishers have taken the rights to sell this book. The 3 games with loss include Tal, Spassky, and Geller.

Contents of this book

This book is filled with only 60 games with annotations. Annotations are also not heavy. The key point from this book is insights provided by Bobby Fischer. In some games, Bobby simply crushed his opponents. Some games give a whole new imagination about the endgame.

When I purchased this book, I was an intermediate player. I was expecting to see some beautiful games by Bobby Fischer. At that time I was a big Fan of Bobby.

When I completed this book, My understanding level about positions increased by atleast 10-15%. Also, that was 1st time where I studied world champion games in detail.

You can expect to get the following benefits

This should be on the bookshelf of any competitive player. It’s one of the classics, like Dvoretsky’s Endgame Manual, or My System. I would recommend this book to beginner and intermediate players. It is very useful to understand more about Bobby Fischer in the early stage of your chess career. If you are a non-chess player or don’t have enough time to spend then I recommend you to read the Wikipedia page of Bobby Fischer. He fought with the Russians and was able to win the world championship match.

What did I like about this book my 60 memorable games by Bobby Fischer?

Here are a few things which I liked about this book

You can purchase the book from here

I found someone who created a database on lichess. The only drawback is they haven’t included annotations. But if you only want to watch the games then it’s perfect for you.

If you like Bobby Fischer’s my 60 memorable games, then you can see the following list where you will find various materials related to Bobby Fischer.