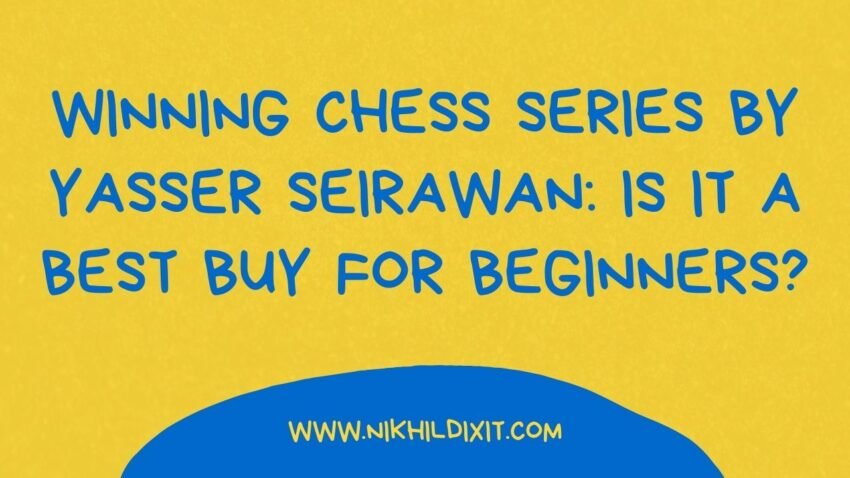 The Winning Chess series is a series of chess books written by Grandmaster Yasser Seirawan and published by Everyman Chess.

The series is aimed at helping chess players improve their game by providing clear and concise explanations of chess concepts. The books cover a wide range of topics, from the basics of chess strategy to more advanced topics such as opening theory and endgame technique.

The Winning Chess series has been praised by both amateur and professional chess players for its clear and understandable explanations of chess concepts. The series has also been praised for its use of diagrams and photos to illustrate key points.

I would highly recommend this series for beginner and intermediate chess players. Also, many chess coaches use this book to teach students.

Playing winning chess is an introductory book for beginner chess players. It teaches you strategies, fundamentals about openings, and basic chess moves. It also has semi-explained biographies of top chess players which will help you to understand chess better.

This book also explains some advanced terms like pawn structures, piece play, etc. If you just started chess then you must purchase this book otherwise you can skip it.

Learning chess tactics is very important in a chess career. If you solve thousands of chess tactics then you will become a master-level chess player. Instead of hoping that your opponent will make mistake, you can work on your tactics with help of this book. GM Yasser explained basic tactical themes and how exactly tactics work. Themes covered in this book include double attack, the pin, the skewer, deflection, the décor, x-rays, and windmills. All positions are taken from actual games.

Deciding strategies in chess most difficult part of chess. GM Yasser explained a few strategies in a very simple manner. He explained how effective planning and analysis techniques help chess players to improve their chess strength.

After completing this book, you will learn-

Winning Chess Openings explains how to:

This book helps you to teach basic endgame techniques and positions. If you are a beginner player, then this book is just perfect for you. Overall if you are looking for the best endgame books, then start with this book and then go for 100 endgames you must know.

Studying endgames also improves your pattern recognization and helps you to understand chess better. If you want to gain practical experience in endgames, then I would recommend you to use chess.com drills features which allow you endgame positions against computer

Winning chess combinations is all about chess tactics and calculation. This book deals with a rich and a vast number of combinations. I always recommend for beginner and intermediate players focus on solving chess tactics. Overall this book is great for players between 1000-1400 ratings. If you are looking for tactics only, then you can go with chess.com membership which will provide you with multiple benefits.

Seirwen is also known for his book series Winning Chess which becomes very popular. Currently, he is a chess coach, chess streamer, and author.